The Institute for Women Of Aviation Worldwide and Plane Finder 2014

Pinkfroot are delighted to once again support Women of Aviation Worldwide Week 2014 (March 3-9, 2014).

During the week of March 9, anniversary of the first female pilot license worldwide and International Women’s Day, the aviation industry proudly showcases its female members and extends a warm welcome to newcomers.

For the occasion, Pinkroot have specifically created a customized version of Planefinder.net which shows the events scheduled for this year’s Women of Aviation Worldwide Week, alongside our live plane tracking.

Any woman who goes on a properly documented free or commercial discovery flight during Women Of Aviation Worldwide Week 2014 is eligible to compete for a prize of $1,500 USD in flight training in the First-to-Solo Challenge.

To report flights conducted within an event please go to: http://www.womenofaviationweek.org/participate/organizing-an-event/

For flights conducted individually, the link is: http://www.womenofaviationweek.org/participate/acting-individually/

Interviews of accomplished Women Of Aviation from around the world will be broadcast online throughout the week starting with interviews at the opening ceremony in College Park Museum, an affiliate of the Smithsonian Institution. Details at http://www.womenofaviationweek.org/women-of-aviation-worldwide-week/keynote-speakers/.

Pinkfroot has been providing live plane tracking apps since 2009 and has a female co-founder. 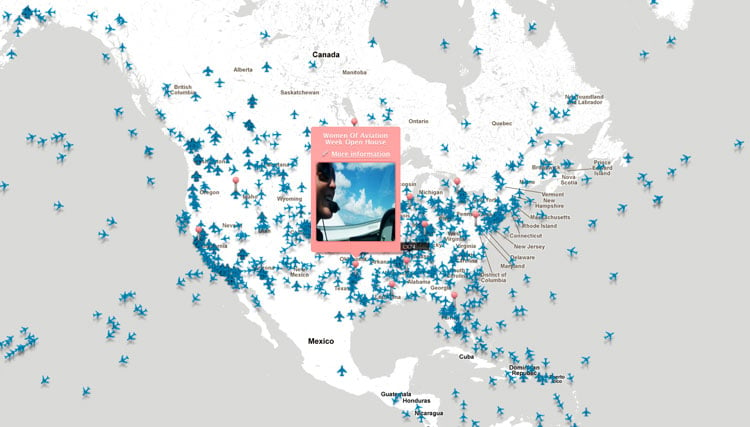