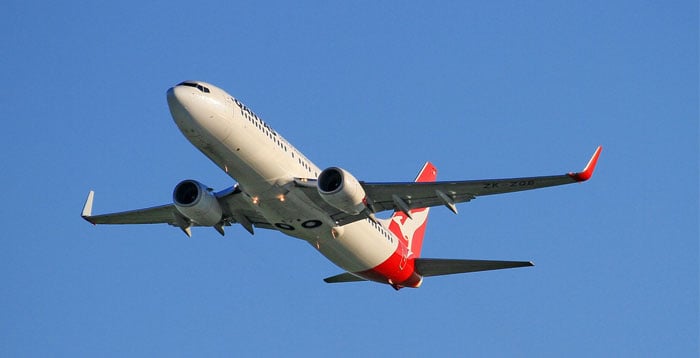 On the 25th of March 2018, the long-range capabilities of Boeing’s 787 Dreamliner were put to practical use. Qantas flight QF9 completed the first non-stop passenger flight from Perth to London – in just over 17 hours.

The six month old 787-9 was received at London Heathrow with fanfare and celebrations, welcoming in the first passengers to ever complete the journey from Australia to the United Kingdom in one flight.

A Four Day Voyage in 17 Hours

Our aviation technology has come an awfully long way. In 1919, the journey from England to Australia took 28 days. In 1947, four days of travel with seven stops was the minimum flight time from Perth to London:

Passengers in Perth are preparing for the first non-stop flight from Australia to the UK, which will last 17 hours. 🇦🇺🇬🇧

Look at how it compares to the original ‘kangaroo route’ ✈#5liveBreakfast pic.twitter.com/t03l9YLw6G

Even as recently as 2017, this journey could take up to a full day or more to travel, with a stop off in Bangkok, Thailand. Still, that’s a lot better than Captain Cook’s first landing in Australia, which took a year and eight months by sea.

How is it possible to make this journey in one hit?

For a purpose designed, custom built, single seat plane, flying around the world on a single tank of fuel is easy. Achieving the same range in a commercial passenger jet is currently impossible – but modified commercial airliners (with most of their seating replaced with additional fuel tanks) have completed single flights of at least 13,423 miles (21,602 km).

A regular, passenger-worthy flight is a different story. You can’t displace too many passengers with fuel or the flight won’t be profitable – so a plane that cuts fuel consumption is the key to flying farther.

The Boeing 787 is a rather pedestrian looking twin engine aircraft – there’s nothing particularly striking about it. But the unassuming exterior design hides the real innovations on the inside.

Overall, it’s 20% more efficient than its predecessor, the 767. This is largely due to the lightweight construction – but the electrical architecture and power management on board have helped reduce burden on the engines. Electronically controlled flight systems take over the bulk of operations. The mechanical, hydraulic and pneumatic systems traditionally associated with planes are a huge drain on engine performance, which affects fuel consumption, top speed and range.

The airframe is the first to be made mostly of composite materials – mixtures of substances with different properties – which account for 50% of the 787’s mass. These lightweight yet strong composites cut the weight of the aircraft significantly, allowing the exceptional range of 9,200 to 9,800 miles (14,800 to 15,700 km).

The Perth to London flight might not be top of the distance charts for long. The 19 hour long, 9,522 mile (15,324 km) non-stop flight from Singapore to New York is planned to begin sometime in the near future, with some citing a 2018 launch.

Track the Longest Flights in the Air Now