The Discovery space shuttle is up in the air for the final time and one her way to the Smithsonian for public display.

The  flight route is expected to go from the Kennedy Space Center where it will perform a series of low-altitude passes over the Space Coast beaches, the visitor center and spaceport before heading towards Washington DC for  more flyovers and an eventual landing at Dulles International Airport.

The total flight is expected to last around 3 hours and 40 minutes.

The flight, including a slow taxi, is designed to give the public and NASA teams great opportunities to view and photograph the flight.

The take-off weight is expected to be around combined 700,000 pounds.

Unfortunately N905NA is not ADS-B equipped so we can’t see this one.

This isn’t the first time a Space Shuttle has been shown off to the public.

Way back in 1983 USS Enterprise completed a European tour including the Paris Airshow. 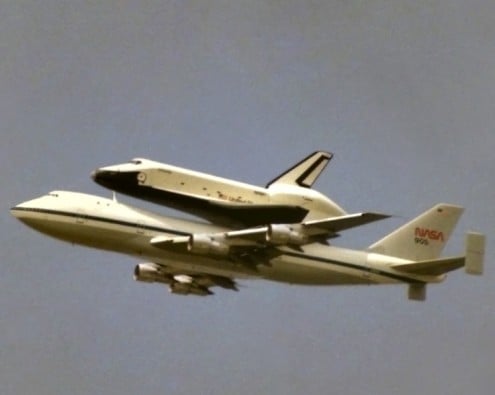 This is the same Boeing 747 aircraft, tail Number N905NA.