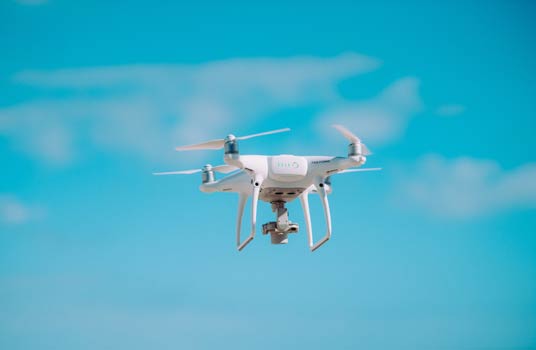 Drones, or Unmanned Aircraft Systems (UAS) have been growing in popularity since their arrival in the 20th Century. Designed originally as weapons and surveillance for the defence industry – they have since become both a vital tool for service and a commercial product used by hobbyists and photographers around the world.

As the technology behind drones has advanced over the last decade, they have become smaller, quieter, more agile and have begun to become a regular sight in our skies. Despite the prerequisite of having a license for flying the drones for commercial usage, just recently there have been several incidents relating to the violation of unplanned drones flying around airports, where there is a considerable risk for crash.

The History of Drones, So Far..

The first ever ‘drones’ or pilotless crafts were actually developed in the First World War – starting with the kettering bug which was still being developed after the war ended. During the interwar period, the development of driverless crafts accelerated with the DH.82B Queen Bee – a radio-controlled US manufactured ‘drone’ which was used for practice and training.

Following this success, nowadays, drones are used for many other things – including climate change monitoring and search operations following natural disasters. In addition to this, they are used for filming and even delivering goods – by companies such as Amazon who are currently trialling the service in the UK.

The versatility and usefulness of the drones have not gone unnoticed by the military – in particular the United States, where they are used for surveillance in awkward areas soldiers cannot reach on foot. They are also sometimes used as weapons, which opens the debate of the ethics of weaponry, the danger to civilians in proximity of firing and the accuracy of data in the first instance.

Earlier this month, an F-22 Raptor pilot in the process of landing almost collided with a small drone in the vicinity following another incident that week where another drone was observed to fly into the line of flight, before retreating away.

Interestingly, in both these incidents, the guard was not able to disable or shoot the drone due to insufficient legal authority surrounding the new technology. This is understandably a worrying matter for the U.S. Air Force – after considering the threat posed if one did hit a moving aircraft and the subsequent danger associated.

Commander of the Air Combat Command, James Holmes has commented on the matter: “Imagine a world where somebody flies a couple hundred of those, and flies one down the intake of one of my F-22s with just a small weapon”. “I need the authorities to deal with that”, he added.

The FAA are responsible for all U.S. airspace, and have already established no-fly zones in restricted and protected areas – but, not all areas are protected and it has not yet been determined at what point the military are able to disable or destroy an interfering drone.

Again, in July 2017 a drone was the root cause of runway closures at Gatwick Airport in the UK. Flights were suspended at the airport whilst authorities investigated the drone sighting, which was a clear violation of UK drone laws, which state that flights near to airports are strictly prohibited.

This is the latest in a string of incidents reported in 2016 involving drones – all in all 70 cases of interference and ‘near-misses’ were recorded during the year. The threat of a disaster remains prevalent as the number of devices sold continues to increase – begging the question of what is being done to circumvent a possible disaster in the near future. This unexpected rise in popularity and development of technology must not leave behind the development of laws and regulations concerning the safe use of drones in the UK and the rest of the world.

The British Airline Pilots’ Association have responded to the incident, citing their concern and the urgent need for re-considered regulation, “Yet another incident at Gatwick involving drones shows that the threat of drones being flown near manned-aircraft must be addressed before we see a disaster.”

“Owing to the huge numbers of drones being sold, more technological solutions will undoubtedly be required to address this problem and should be mandated. These should include, amongst other things, geofencing as standard and a system whereby the drone transmits enough data for the police to locate the operator when it is flown in a dangerous manner. If the user has endangered an aircraft, we would like to see the culprit prosecuted; endangering an aircraft has a maximum sentence of five years in prison” it was added.

When it comes to aviation, at Plane Finder we are proud to be passionate about all things skyward, keeping everyone up to date with the help of our live, up-to-the-minute flight tracking web interface and app.

Our app can be downloaded here, and, if you wish to find out more about what we do, drop us a line and one of the team will be in touch shortly.