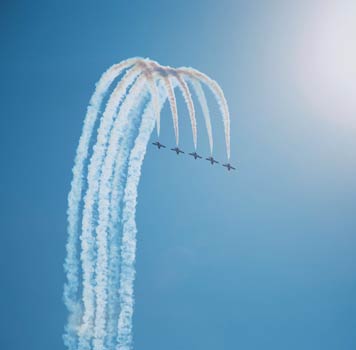 Originally established in 1909, the Paris Air Show is a large commercial event demonstrating primarily military aircraft to potential customers and members of the public over the course of one week, during which many contracts are signed, and sights are enjoyed.

Organised by representatives from the French aerospace industry body, (GIFAS), the show attracts spectators in their hundreds and thousands. By tradition, the first four days are dedicated to professional interest in military aircraft, with the following three open to the general public to enjoy a variety of air displays of impressive take-offs, landings, acrobatics and stunts.

The last Paris Air Show, held in 2015, saw a record 351,584 visitors attend to watch over 2,300 exhibitors showcase their labours. The event was documented by 4,359 journalists from 72 countries. Overall, £130 billion in major aircraft sales contracts were announced by main international manufacturers and military representatives during the show.

This year, we expect to see more of the same – with some highly anticipated debuts expected including the likes of Elbit Systems and Lockheed Martin.

One particular debut due to draw considerable attention, Elbit Systems’ loitering weapon system the ‘SkyStriker’ will exhibit its ability to locate, acquire and attack targets with impeccable precision. The small craft features an electro-optical/infrared seeker which is used to identify threats through an operating facility, ideal for those looking to invest in defence. It is also rumoured to provide a small acoustic signature, enabling lower altitude operations to fly under the radar.

The SkyStriker weighs in at a stealthy 35kg – comfortably able to hold a warhead load of up to 10kg for around two hours. According to Elbit, the target can engage from a variety of angles and can land using the combination of airbags and a parachute.

From Lockheed Martin, the new Super Hercules LM-100J is another much-anticipated debut set to take flight at this year’s Paris Air Show. Contrasting to the stealthy SuperStriker, this is the now the 17th variant of the Hercules transporter and is designed to carry vital military equipment from unprepared airfields without ground services in urgent situations.

With similar features to its military cousin, the C-130J, including four Rolls-Royce engines featuring automatic engine thrust control, digital controllers and an impressive 4,637 bhp per engine – the LM-100J is certainly on course to pack a punch.

Its main functionalities are varied, from aerial spraying, firefighting, transportation of cargo and civilians, exploration missions and search and rescue – making it a great investment for military operations.

Due to its recent remarkable performance in test flights, it was decided the Super Hercules was to star in what George Shultz, Vice President and General Manager of Lockheed Martin has called the ‘World’s greatest air show’. He went on to add, “The LM-100J’s presence at the Paris Air Show presents the opportunity to highlight its proven capability and unmatched versatility to the global commercial marketplace, which we are honoured to introduce the LM-100J to”.

If you’re not one of the lucky attendees for the main event in Paris next week, apart from re-living the action after it’s happened, Plane Finder’s unique flight tracking interface enables you to tune into the action, live and uncut, straight to your connected device.

Operating from a global network of antenna radars and data feeds – broadcasting live from aircrafts, users are able to track the aircraft name, speed and destination, including information on diversions from their original course.

Our app also enables the use of augmented reality, in order to find out information on the model, make, destination and speed of aircraft you see in the sky, wherever you may be.

As the weather heats up nicely, Air Show season is now upon us, with local, national and international events taking place in the coming months.

With the famous Farnborough Air Show not returning for another year, Plane Finder is looking forward to keeping up with and tracking the paths of many others, including Bournemouth and Goodwood – watch this space!

To experience the Plane Finder app, click here to download it. If you have any other questions, simply get in contact by filling in a short form here, and we’ll get back to you as soon as we can.