The NTSB has moved quickly as they investigate Saturday’s fatal crash of Asiana Airways flight OZ214 at San Francisco.

The crash killed two Chinese students and left a further 182 injured, at least 8 of those have serious injuries.

Yoon Young Doo, head of the Korean carrier Asiana Airlines, said on Sunday that he had ruled out engine or mechanical problems in the crash.

National Transportation Safety Board (NTSB) investigations are also focusing on the actions of the crew as the aircraft appears to have been coming in too low and too slow.

Here on planefinder.net we’ve published some of our own data on the accident.

The video below shows a Google Earth playback of the flight (down to 850ft).

Our KML is available here.

The video is also here: http://www.youtube.com/watch?v=XwTF4YQspMs 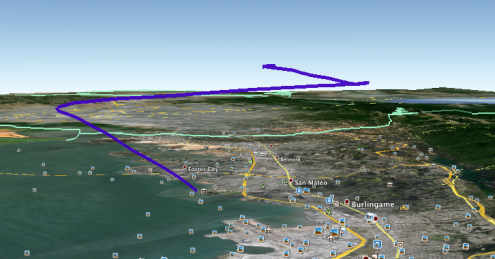 Asian Airways flight OZ 214 had departed from Shanghai before stopping in Seoul en route to San Francisco and was carrying 307 people, 291 passengers, and 16 crew.

Investigations are also under way to determine if one of the students was actually killed on the ground by a recovery vehicle after the crash.

Information has emerged that the experienced pilot was new to the 777 although the co-pilot had over 10,000 hours in the aircraft.

Asiana Airlines has said that Lee Kang-kook, the pilot in charge of the landing, had flown Boeing 747’s into San Francisco but was training for the 777. The Associated Press reported that this was his first flight into San Francisco at the controls of a 777. The pilot was being assisted by another pilot with more experience flying the 777.

Saturday’s crash was the first fatal crash of a commercial airline in the USA for over 4 years.