Earlier today we noticed a flight diverting off its normal course!  It is not unusual for this to happen but it turns out that this one is slightly different to normal!  JetBlue flight 191 from New York JFK to Las Vegas McCarran airport was forced to land early in Amarillo Texas when the captain caused a stir in the cabin!  He was reported to have been running up and down the aisles screaming “Say your prayers” after being locked out of the cockpit.

An off-duty NYPD officer subdued the captain and the pilot in charge then decided the best course of action was a diversion to Amarillo Texas.  An off-duty JetBlue pilot assisted the aircraft down.

The aircraft is still on the ground now and was escorted down by Cobra helicopters.

N796JB is one of many Airbus A320 aircraft in the JetBlue fleet that operates all across the USA for the low-cost airline.

Some footage from on board the aircraft has also leaked out.

We caught some of the action on planefinder.net earlier today and you can see it here 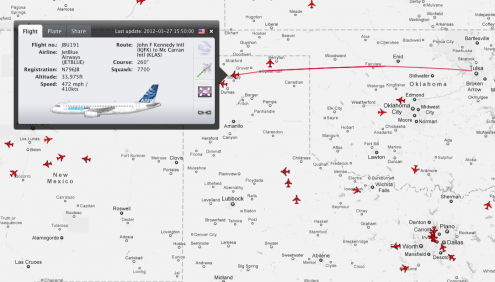