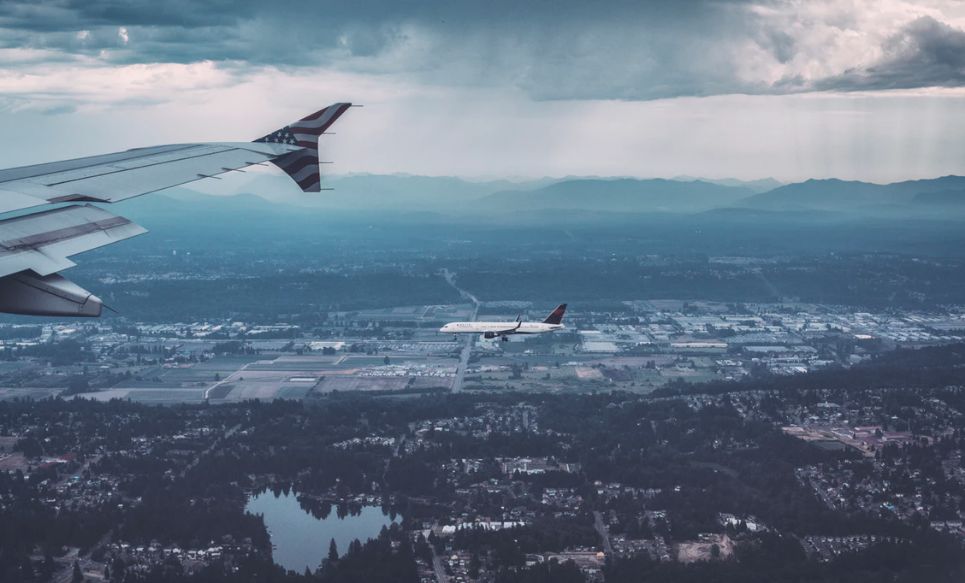 Right now, it’s Friday afternoon in the UK. Most of the inhabitants of the USA are awake – or will be stirring from their slumber soon. And there are already thousands of planes in the sky. Plane Finder is flight tracking over 12,000 planes as we write at this moment.

On any given day, air traffic control is responsible for 50,000 planes – that’s just in United States airspace alone. Globally, the world passed 100,000 daily flights in 2014, with around 9,000 airports managing all those departures and arrivals.

The sky’s a very big place, but most flight paths are the same – so how does air traffic control (or ATC for short) manage to keep things in order? Unlike road traffic, planes can’t put the handbrake on and sit in queues: if planes aren’t moving, the wings aren’t generating lift, and so they fall. But even with the (apparent) luxury of queuing, road collisions are frighteningly common.
So how do air traffic controllers keep a sky full of planes moving, a safe distance apart and on time?

Thankfully, air traffic differs from the previously mentioned road traffic in another key way: it’s three-dimensional. The chances of two or more objects colliding when they’re confined to two dimensions of free movement is exponentially higher than it is for objects free to move in three dimensional space. The extra dimension of movement gives a massive safety advantage when it comes to collision: so much so that mid-air collisions are extremely rare and have been throughout civil aviation history.

Even before a plane takes off, the wheels for tracking, monitoring and controlling the flight are in motion. As the pilot of the aircraft makes their pre-flight checks, they submit a flight plan. The flight plan contains details like the flight number and aircraft type, intended airspeed and cruising altitude, and the route itself – including ATC centres along the way.

First, it goes to the ground controller – responsible for all traffic on the ground: traffic on runways, as well as to and from gates, is closely monitored with radio communication and radar to keep things moving smoothly and safely.

When cleared for flight, ground control hands over to a local controller – responsible for take-offs and maintaining safe separation distance. The local controller hands the flight over to a terminal radar control centre as soon as the plane’s wheels leave the ground – but keeps tabs on the flight until it leaves a 5 mile radius of the airport.

From there, the aircraft’s transponder receives radar information from control centres along the route, bouncing them back with additional encoded information: flight number, airspeed, altitude and destination. This information shows on the radar screen at the controller’s workstation, where a new flight progress strip is printed at each stage of the flight.

The flight is tracked and passed from control centre to control centre, until on approach to its destination, the process is reversed. The whole operation is carried out with such precision that passengers don’t even notice.
It’s a sophisticated and elegant system designed to keep air travel smooth, safe and on time.

Hang On: What About Flying Over the Ocean?

It’s true that there aren’t any air traffic control centres in the middle of the ocean, and that radar coverage doesn’t extend too far out at sea. A flight from New York to London will spend (approximately) 4 hours out of radar range over the Atlantic.

In these modern times we live in, satellites take over tracking duties – with radio as a fallback. Along more remote paths, pilots communicate regularly with air traffic controllers and log their altitude, airspeed and the time. This gives ATC a very good estimate of distances of separation for each flight in the area.

Interested in seeing the busiest flight paths for yourself? Plane Finder is a real-time flight tracker. Our iOS and Android App puts the power of flight tracking right in the palm of your hand!