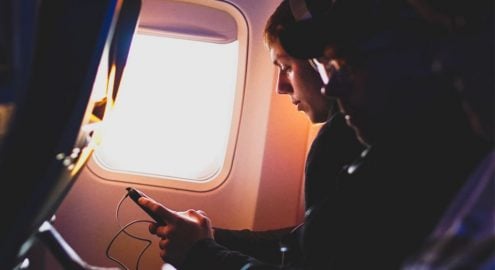 Qantas has trialled and tested their in-flight WiFi. Their passengers are pleased with the service. So now, with a working proof of concept, Qantas has pledged to bring in-flight WiFi to 80 of its aircraft by the end of 2018.

As more planes with WiFi take to the skies, we answer the real burning question on everyone’s minds: how do you get an internet connection seven miles in the air?

The WiFi is the Easy Part

Ever since mobile phones and tablets became the world’s favourite computers, wireless connectivity has been the invisible force keeping everything together. WiFi is everywhere – not just in your local cafe or your living room, but on buses and trains too. Now, it’s high in the sky on commercial airliners.

The WiFi itself is relatively easy to pull off on an airliner: all you need is a wireless router, just like the one in your home, office or local cafe. The router connects your device wirelessly to an internet-enabled network, allowing you to send and receive data.

Unlike the router in your home, the router on a plane can’t be plugged into a phone line. So how do you feed a plane, cruising at around 35,000 feet, with a stable internet connection?

There are a couple of ingenious solutions to the problem. Let’s take a look at how engineers have managed to get an internet connection to reach a plane in mid-flight.

With a few tweaks, the same technology that sends data to your mobile phone can also be used to broadcast and receive signals to and from aircraft. Mobile phone data towers have a surprisingly long reach – the limiting factor to how far a 4G or 3G connection can go is usually the power of a mobile device’s receiver. Mobile data towers are also optimised to have a wide horizontal range, not to send information vertically.

So by using cellular data towers and essentially pointing them upwards, engineers found a way of getting an internet connection skywards. A powerful receiver on board the plane switches from tower to tower as it flies out of the range of one and into the range of another. The cellular data connection feeds the wireless router on board, which then serves your mobile device in-flight. Nice and simple!

Except for one problem: there aren’t any mobile data towers out at sea. To tackle this, older technology is called upon to save the day on transoceanic flights.

Satellite internet connectivity has been around for a while. It’s normally used to service remote ground-based locations with a steady flow of data. It works by using satellites in orbit around the earth, providing near-global coverage. These satellites communicate with a small antenna mounted on top of an aircraft, which relay the data back to ground-based communications.

The satellite method has been chosen by Qantas – sensible considering the significant amount of open water covering the most common Qantas routes. It’s also claimed that a satellite connection has a higher bandwidth and faster speeds than the ground to air, cell tower alternative. So why isn’t it the de facto connection for airliners?

Well, it’s expensive. Satellites aren’t just expensive to build – they quite literally cost an astronomical amount of money to put into space. Maintaining them is difficult and dangerous. Even if satellites present a better level of service, the ageing machines currently in orbit are lagging way behind what they could be. In time, SpaceX and Blue Origin could slash the cost of satellites, bringing an affordable, reliable and fast infrastructure – but for now, the money’s with ground-based solutions.

Flying with WiFi? Try using Plane Finder – the real-time flight tracker. Our iOS and Android apps put powerful flight tracking in the palm of your hand, in the sky or on the ground.