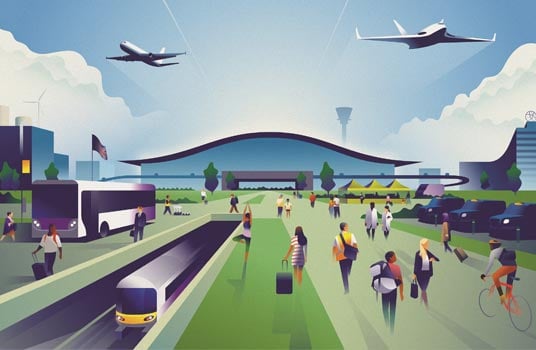 The impending project for building a new runway at Heathrow Airport has encountered its fair share of opposition – including concerns regarding noise pollution, air quality and rising carbon emissions contributing to the overall concerns about climate change in the UK. Despite this, it looks to be going ahead, with the government and an Independent Airports Commission having given the all clear – with the Heathrow runway said to produce an extra 260,000 flights to track per year!

To combat these negative associations, the project co-ordinators have widely publicised the release of ‘Heathrow 2.0’, a new sustainability strategy publishing the expected benefits of new technologies, innovation and the commitment to carbon offsetting – dubbed as ‘greenwashing’ by some. The overall aim of the proposal is to successfully dissociate themselves from the pollution effects usually associated with aviation, and in doing this can counter the opposition and threats to the plans.

Of course, making the airport completely carbon neutral would be a tough call, given that the flights themselves cause the most carbon emissions, along with noise from planes and the cars travelling to the airport. So, what can Heathrow 2.0 do to overcome this?

Heathrow 2.0: The main points in a nutshell

Heathrow 2.0 is set into four main focuses, which include more jobs, meeting the demands of the people living in the surrounding areas, improved connections and sustainable future growth.

‘A Great Place to Work’

Heathrow 2.0 envisions that the expansion will bring with it up to 180,000 opportunities across the country, with a further 10,000 apprenticeships. They go on to say that these opportunities will be life lasting – offering a nurturing strategy to help people to fulfil their potential.

‘A Great Place to Live’

Recognising that the impact of the new runway on the residents around the area, Heathrow 2.0 aims to draw attention to the positives of the close proximity – such as jobs, economic prosperity and new homes. The first steps aim to improve public transport links, in order to reduce congestion and air pollution whilst also making transport more accessible for residents, subsequently enhancing opportunities through this.

According to Heathrow, the new runway will contribute up to £211 billion and around 180,000 jobs across the UK, as a result of the improved connections with the World – with a focus on ‘reliable, low carbon choices’, said to include local support for SMEs and social enterprises whilst exercising control through the supply chain and offering incentives to sustainable suppliers.

The new runway expansion has been proclaimed to serve 120 long haul destinations direct, creating opportunity and positioning the UK as a nation with the best connections to the rest of the world.

‘A World Worth Travelling’

Heathrow 2.0’s final target is future focused, recognising the possible negative effects of the runway and how this can be sustained to preserve the future environment for the generations to come.

The overall objective of the campaign is re-addressed here, that Heathrow 2.0 will aspire to reach a stage where the new runway will operate as a carbon neutral. This will be helped by plans for a carbon neutral airport, in addition to measures, take to protect people and wildlife from trafficking.

For full details of how this will be achieved by Heathrow, click here.

Why Aviation Expansion is Important for the UK

The changing landscape of Britain is mirrored by its changing place in the world, taking into account our future position outside of the EU putting an emphasis on global trade for our economy.

UK aviation is undeniably a great success, and it can be said that airports play a vital part in facilitating the flow of trade and business to and from our country – securing our future in tomorrow’s world.

The government support for projects such as Heathrow’s third runway further underlines this, implying difficult decisions are being made in order to secure a bright, prosperous future.

How this will affect Aviation in the UK

With 40% of all Britain’s trade outside the EU reliant on air travel, and with record passenger numbers recorded over the last two years, the strain on current facilities and infrastructure has pushed Britain’s airports to contemplate the present and look toward the future – of which there is anticipated to be 33,000 new passenger and freight aircrafts produced over the next 20 years.

This will approximately double the current world fleet of aircrafts, which will utilise new technology that will be quieter, cleaner and lighter – in order to conserve resources and limit emissions.

And, with emerging markets developing and increasing air traffic growth – there is an anticipated £4.7 billion in exports expected to be created, and around 20,000 high-value jobs expected to emerge over the next decade. The UK government is keen for us to be at the forefront if these developments, whilst maintaining our existing connections with the US, Australasia and Europe.

Keeping up to date with these huge developments has never been easier with the flight tracker app from Plane Finder – which enables you to search through the world’s airport to find a particular flight, which you can track arriving and departing from arrival and destination airports, right around the world or if you want to keep an eye on Heathrow 2.0, click here.

With the most up to date tracking technology, Plane Finder are your first port of call when keeping up to date with aviation news, we look forward to staying at the forefront of new developments with airports and aircrafts.