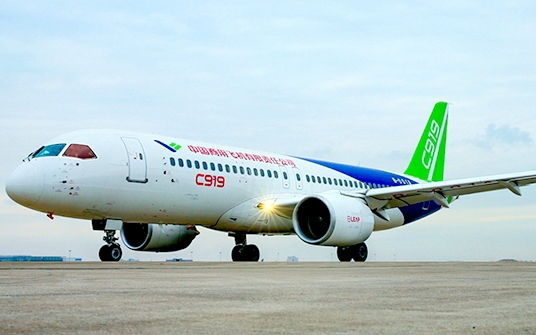 Recent developments in aviation have got us excited here at Plane Finder HQ, particularly as earlier this month we were able to track the maiden flight of a brand new aircraft, Chinese-built passenger jet the C-919.

This is a particularly pivotal advancement for Chinese aviation, with the C-919 said to launch the country into a bright future both up in the skies and throughout the world.

The C-919’s maiden voyage lasted 79 minutes, taking off and returning to the Shanghai Pudong International airport. The flight was a particularly symbolic moment for China, as a sign of their entrance and rise into the aviation world, and was broadcast live on state-controlled television.

Designed to compete with the Airbus 320 and Boeing 737, the aircraft was made by the Commercial Aircraft Corporation of China, Comac; founded in 2008 with the purpose of producing the first commercially functioning aircraft for passengers – something the state-run company had previously failed to succeed in doing in the 1970s.

Despite several components from the plane having been imported, including the landing gear of German origin, Austrian interior and franco-American engines – the twin-engine carrier is certainly an impressive step forward for the Chinese, and aviation as a whole.

A Historical Landmark for Chinese Aviation

The feelings of patriotism and pride were certainly echoed by President Xi Jinping’s key political slogan, with the media citing the flight was “another fulfilment of a Chinese dream,” together with the agreement of the viewers saying “It’s awesome”, and “These days China can make anything.”

One engineer who worked on the project has commented: “I am very happy and proud to see the takeoff. It is very beautiful – a very smooth takeoff, we are very proud to see that it worked”.

The Future of Passenger Air Travel

Developed by state-owned Commercial Aircraft Corporation of China, the new aircraft has already generated significant interest in the market and has certainly ruffled some feathers. Aviation expert Gu Bin predicts the aircraft will “rip a hole” in the current duopoly dominated by Boeing and Airbus, and this seems to be the consensus from many airliners, too.

Irish firm Ryanair have already expressed their interest in the aircraft, with CEO Michael O’Leary commenting: “We are pleased that there is now a real alternative to Boeing and Airbus, and look forward to working closely with Comac to promote moe competition among aircraft manufacturers, which can only be good for lowering the cost of air travel for consumers all across Europe towards the end of the decade.”

By 2024, China is expected to exceed even the United States as the world’s new largest aviation market. Following on from the success of the C919’s maiden flight, the Chinese are expected to produce around 6,800 single-aisle planes, along with fulfilling substantial order criteria for 23 different airlines of the C-919.

To be at the forefront of aviation news and as-it-happens information, there’s no better place than Plane Finder’s flight tracker.

With our global network of data feeds and antenna radars, through this data broadcast, we are able to track real-time flights from all over the world. Our desktop interface, planefinder.net, and our apps together enable you to catch the latest developments in aviation and watch flights live on screen.

Image is taken from UPI News.