A British Airways jet was forced to make an emergency landing after both the captain and first officer nearly passed out. The Airbus A321-200 G-EUXL was flying from London Heathrow to Glasgow on the 20th December 2011. The flight number was BA1486/SHT6E.

The crew were climbing out of Heathrow after taking off from 27R when the crew declared the emergency.  The crew levelled off and decided to return to Heathrow for a safe landing on 27R.  The captain and first officer also asked the cabin crew to bring oxygen up into the cockpit.

The Air Accident Investigation Branch are now investigating the incident.

All the passengers re-boarded another plane G-EUXF and got to Glasgow around 3 hours later than planned!

You can view the action for yourself using the playback functionality of planefinder.net 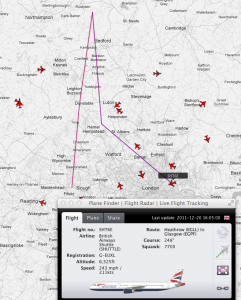