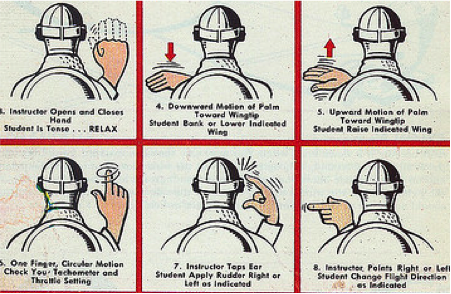 Before the days of radio, communication in the air used to happen through hand signals; wiggling the wings, dipping the nose of the aircraft and firing flares. Commands and direction were very limited with a majority of WW1 pilots making it up as they go along. To communicate with the ground, scraps of cloth or paper were written on, attached to something heavy and dropped from the aircraft.

With the introduction of radio, voice communications meant that aircrew could not only communicate with each other, but also with the ground. In today’s busy skies communication is absolutely vital to the successful and safe journey of any aircraft. Strict control of large transport aircraft in busy airspaces allow lots of aircraft to fly closely together. The more aeroplanes that can occupy a piece of airspace, the more flights you can achieve in a shorter space of time. Without being able to communicate instructions and information, this level of proximity in the air would be hugely dangerous and close to impossible.

In this article we’re going to follow a typical airline flight from its airport of departure through to its destination and look at what communication takes place with whom and when to see just how much talking goes in to safely manoeuvring these giant buses of the skies.

The below information was provided by a first officer from a popular low-fare UK airline in combination with information provided publicly by the CAA.

Before closing the doors

Communication starts before the pilot even starts the engines. Using a system called ACARS (Aircraft Communications Addressing and Reporting System) which is a datalink system between an aircraft and ground control, ATC (Air Traffic Control) provide a printed flight plan. This details things like the listed route and most importantly it lists changes to the originally filed flight plan. This could be anything from weather or changes to the route for political reasons meaning that no traffic is allowed to fly through certain airspace.

While the passengers are boarding the plane the pilot and co-pilot carry out their checks. One of these checks is to listen in to the ATIS (Automatic Terminal Information Service) report. This is a constantly repeating transmission that provides local information such as altimeter settings, weather and any additional safety information concerning the aerodrome or airport. Each ATIS comes with a letter that represents which transmission cycle is being played. From this the pilot will get a frequency to contact the ground controller.

Once that’s done, notes are made and checklist complete, the pilot goes ahead and gets in touch with the ground controller on the frequency provided:

The pilot communicates the gate they are standing at, the aircraft type, what ATIS they listened to, the QNH which is an altimeter setting and asks for clearance to carry out their flight plan.

From here the final procedures will be made, doors will be closed. Airlines must request permission to start their engines as there are always a lot of ground crew walking around the aircraft.

Once the pilot has read back the information the engines are started up and tea trays and chairs are placed in their locked and upright positions!

Engines on, taxi to runway

Once the pilot is ready to leave to head for the runway, usually the pilot also has to request a ‘push back’ and then clearance to taxi. The push back is when the aircraft is ‘pushed’ using a small but very powerful tow vehicle away from the gate so that it can move forwards and taxi away. 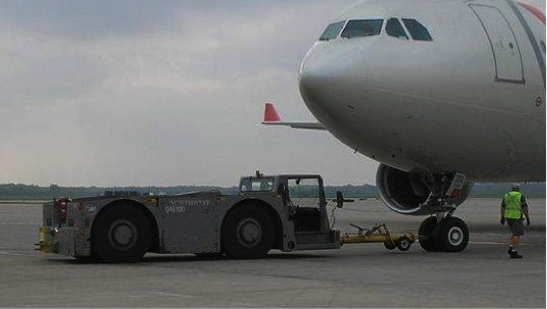 Most clearances, especially at busier airports, are provided to pilots as ‘conditional’. This means that there is a set of instructions that must be followed in order to carry out the clearance. For example, a pilot might request for push back and taxi clearance but the ground controller may say something like:

This means the pilot is required to start the pushback once the blue and white A320 has passed behind them on the taxiway.

Once the aircraft has been pushed away from the terminal and the tug unclamped the pilot is then ready to request taxi permission to the runway.

Once the read back is confirmed, the ground controller will provide a frequency change to contact the controllers in the tower.

The aircraft will then get in line and begin its slow and careful taxi following the exact instructions provided by the ground handler. To navigate their way around, pilots use a book that provides all the taxiway details for nearly every airport and aerodrome in the UK. This provides maps and frequency details that the pilot and co-pilot can reference, basically so they don’t get lost or go the wrong way down taxiways!

Once the pilot reaches what is called the ‘holding point’ he has to wait to be given further clearance onto the runway itself. The yellow ground markers highlight the holding point; on one side is the taxiway and the other is classed as the runway.

At this point the pilot will again get in touch with the controller and let him or her know that they are approaching the holding point and will require take-off clearance. Additionally, the two pilots will be finalising their safety checklists making sure the aircraft is configured correctly for take-off.

At this point the controller may also give amended details to the original take off plan, they may tell the pilot to continue to hold their position, change the pattern to fly and provide a new altitude to which to climb to. At major airports and aerodromes pilots of airliners all fly specific take off patterns and landing patterns. This keeps the skies organised and helps radar controllers keep aircraft in the air and on the ground co-ordinated and safely separated.

When the situation is safe to do so the tower controller will contact the aircraft and give the pilot a line up clearance. This allows the pilot to move the aircraft into position and get ready to take-off. This is usually conditional. 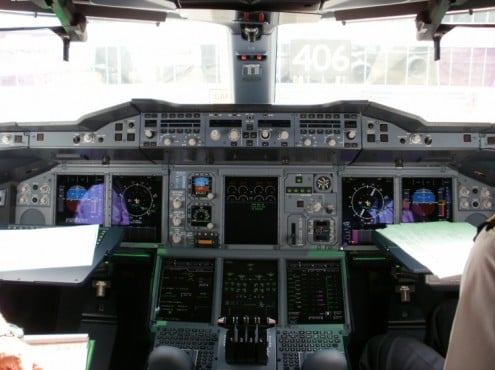 So the pilot would have to wait for the specified landing aircraft to pass, then line up on the runway. The reason they’re not given complete take-off clearance is that the previously landing aircraft needs time to move off the runway and into the taxiway, leaving things clear for our aircraft to take-off.

Once lined up, the pilots complete any last minute checks; the tower controller then gets in touch to provide clearance to take off.

Because during the take-off there are a lot of things the crew in the cockpit have to think about, communication doesn’t occur again until the aircraft is off the ground and gaining altitude to the level it has been cleared to.

This is the first stage of the flight completed – the take off stage. The aircraft is now in transit from its departure airport and en route to its destination. The pilot will tune in the new frequency and get in touch with the new controller that will monitor their flight and provide directions of where to fly and to what level in order to maintain separation from other air traffic.

“Squawk ident” is an instruction that means the pilot is required to press a button on a computer that fires off a transmission to the radar. This then pops up on the radar controller’s screen that identifies the aircraft. You can read more about squawk codes and transponders in another Planefinder article.

During the on-route section of the flight the aircraft will pass through several different airspaces. Each airspace may be controlled by a different air traffic controller. Once an aircraft gets to the edge of a controllers sector he or she passes control of that aircraft to the next controller.

Additionally, instructions are often passed that move aircraft onto different headings and altitudes. This can be for multiple reasons including achieving better fuel economy, faster arrival times making use of particular atmospheric conditions that are favourable to flight and emergencies.

The pilot can also make requests for particular routing changes if they think it will be beneficial. They make the request to the radar controller whose discretion it is to clear it or deny it.

A typical communication that provides directional instructions to a pilot may go like this:

As the aircraft approaches its destination it again passes through the hands of several controlling authorities. During the descent there are flight levels and altitudes which the aircraft is strictly controlled under by the radar officer.

Once the airport is in range the pilot will also listen in to the ATIS report. This will give them all the information they need about the airport; weather conditions, runway in use and many other important pieces of information.

The final controller they speak to will also release the aircraft to the approach controller. He or she is responsible for controlling aircraft in the immediate airspace vicinity of the airport and organising landings.

The ILS (Instrument Landing System) is a system used at airports to help guide aircraft down to the runway without having to look out the window. This involves special instrument equipment within the cockpit and on the ground that allows a pilot to control an aircraft in such a way that he can follow visual cues from the instrument and safely land the aircraft. The pilot reports to the controller once he or she has positioned the aircraft on the ILS and is following it down to the runway.

The QNH readout from the controller is a setting that the pilots can plug into their altitude reading instrument called an altimeter. This ensures that they are reading the correct height.

There is no need in this case for the pilot to read back the surface wind information. Once the aircraft is down, it’s time to vacate the runway. There’s one more communication with approach control before the pilots then start talking to ground control once again for taxi instructions to the terminal.

Once the aircraft is at the gate safely the engines are shut down and the parking brake set. The Captain always carries this part of the flight out and once he’s happy the aircraft is secure he releases his cabin crew and passengers to begin disembarking the aircraft.

Throughout the whole flight whether from the UK to the US or from Italy to France, pilots of airliners are in constant communication and radar contact with a controller. There are many procedures for emergencies, unusual circumstances and more that both controllers and pilot must know to the letter in order for the skies above our heads to be consistently safe.